A report from the Australian Institute of Health and Welfare found that the cancers with the largest survival gains during the last 30 years are: 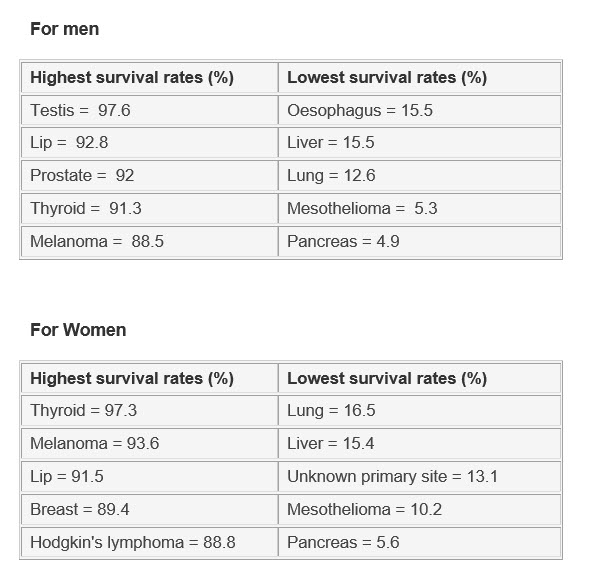 It is important to find cancers early, and to be treated by cancer specialists who are at the top of their game – which is why we only recommend the best, from our experience at Executive Medicine.

Lung cancer occurs overwhelmingly in smokers. We can screen for lung cancer with a lung CT scan.

Liver cancer may be diagnosed with imaging such as the V-Scan, in addition to a physical examination with blood testing.

Prostate cancer now kills about 3000 men a year. Survival rates have improved from 58% to 92%. Blood testing for PSA may have introduced some bias into this startling figure however.

Breast cancer
For breast cancer, which makes up one-quarter of all cancer cases among women, the Australian Institute of Health and Welfare Report said five-year survival rose from 72% to 89% between 1982-87 and 2006-10.

One in two Australians will develop cancer before the age of 85. One in five will die from the disease.

Overall in the 25 years prior to 2007, the incidence of all cancers in Australia rose by 27% (which is likely due to better diagnosis) but deaths from the disease fell by 16%.

In the past 10 years, only one of our regular patients died from a cancer. It was a melanoma and he had been a long-term patient of the high risk melanoma unit. Everyone else has done extremely well due to early diagnosis and treatment.

Many patients have had quite aggressive tumours picked up during their annual physical examination and subsequent testing. Due to early diagnosis and treatment they are essentially cured.

Early detection and prevention of disease. This is what we are all about.

Located in the heart of the CBD, our practice offers a premium healthcare service to our individual, corporate and executive clientele. We look forward to taking care of your health needs.

Join 3000 Sydney-siders who prioritise their health with our weekly newsletter challenges!